Apache Flink is a framework and distributed processing engine for stateful computations over unbounded and bounded data streams. Flink has been designed to run in all common cluster environments, perform computations at in-memory speed and at any scale.

You can clone this repo and mount it to docker,

The above diagram is the architecture of Flink on Zeppelin. Flink interpreter on the left side is actually a Flink client which is responsible for compiling and managing Flink job lifecycle, such as submit, cancel job, monitoring job progress and so on. The Flink cluster on the right side is the place where executing Flink job. It could be a MiniCluster (local mode), Standalone cluster (remote mode), Yarn session cluster (yarn mode) or Yarn application session cluster (yarn-application mode)

The Flink interpreter can be configured with properties provided by Zeppelin (as following table). You can also add and set other Flink properties which are not listed in the table. For a list of additional properties, refer to Flink Available Properties.

Running Flink in local mode will start a MiniCluster in local JVM. By default, the local MiniCluster use port 8081, so make sure this port is available in your machine, otherwise you can configure rest.port to specify another port. You can also specify local.number-taskmanager and flink.tm.slot to customize the number of TM and number of slots per TM. Because by default it is only 4 TM with 1 slot in this MiniCluster which may not be enough for some cases.

In order to run Flink in Yarn mode, you need to make the following settings:

In this mode, Zeppelin would launch a Flink yarn session cluster for you and destroy it when you shutdown your Flink interpreter.

Scala is the default language of Flink on Zeppelin（%flink), and it is also the entry point of Flink interpreter. Underneath Flink interpreter will create Scala shell which would create several built-in variables, including ExecutionEnvironment，StreamExecutionEnvironment and so on. So don't create these Flink environment variables again, otherwise you might hit weird issues. The Scala code you write in Zeppelin will be submitted to this Scala shell.
Here are the builtin variables created in Flink Scala shell.

There are 2 planners supported by Flink SQL: flink & blink.

Check this page for the difference between flink planner and blink planner.

You can write whatever Scala code in Zeppelin.

e.g. in the following example, we write a classical streaming wordcount example. 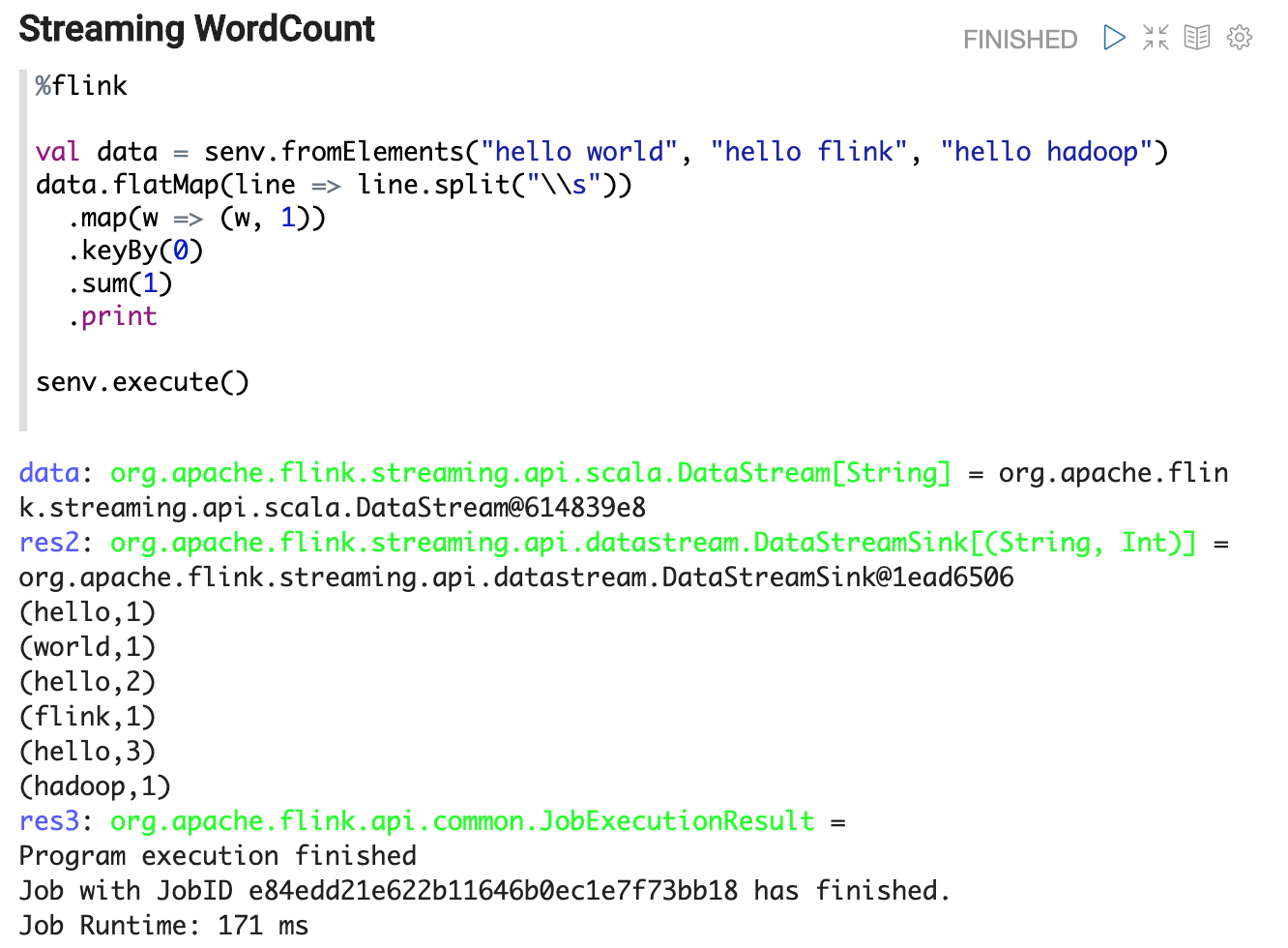 You can type tab for code completion.

ZeppelinContext provides some additional functions and utilities. See Zeppelin-Context for more details. For Flink interpreter, you can use z to display Flink Dataset/Table.

e.g. you can use z.show to display DataSet, Batch Table, Stream Table.

In Zeppelin, there are 2 kinds of Flink sql interpreter you can use

Flink Sql interpreter in Zeppelin is equal to Flink Sql-client + many other enhancement features.

2 kinds of sql comments are supported in Zeppelin: 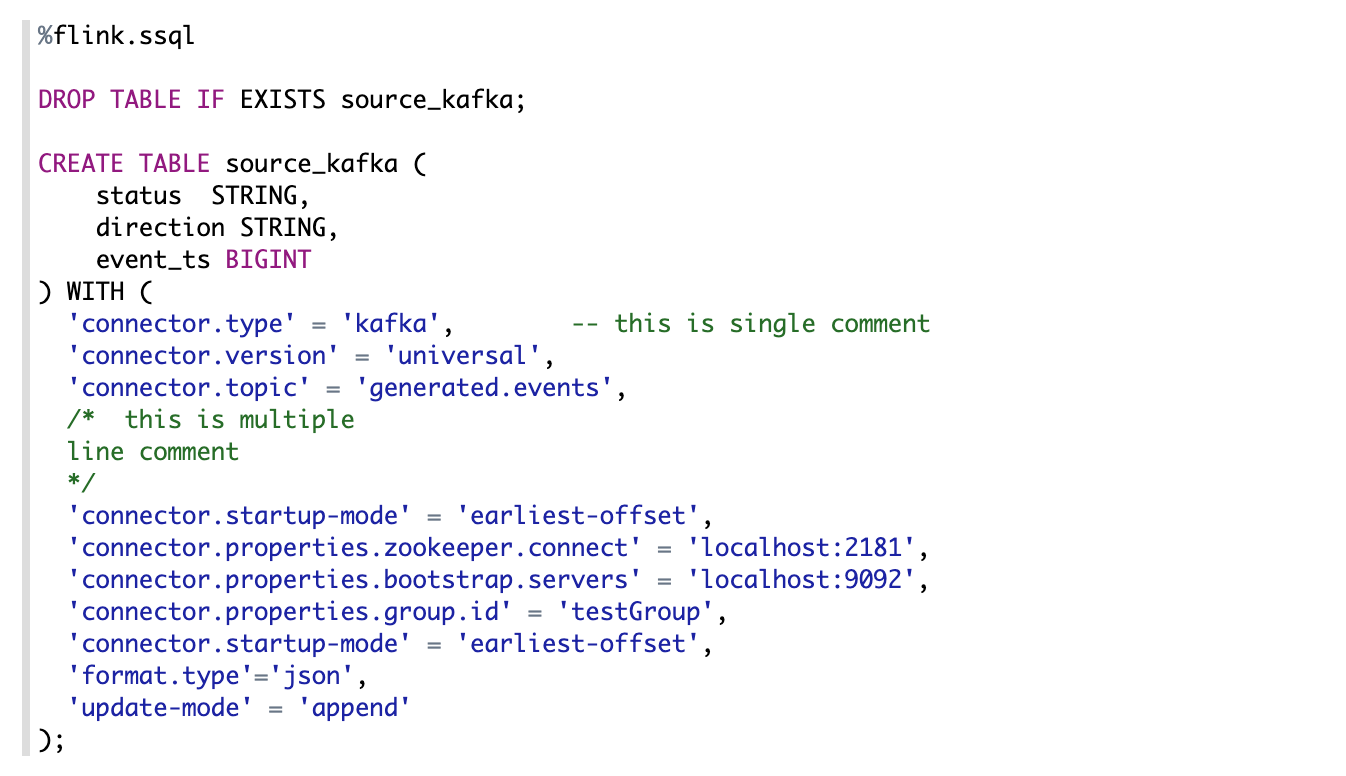 You can set the sql parallelism via paragraph local property: parallelism

Sometimes you have multiple insert statements which read the same source, but write to different sinks. By default, each insert statement would launch a separated Flink job, but you can set paragraph local property: runAsOne to be true to run them in one single Flink job.

Single mode is for the case when the result of sql statement is always one row, such as the following example. The output format is HTML, and you can specify paragraph local property template for the final output content template. You can use {i} as placeholder for the ith column of result.

Update mode is suitable for the case when the output is more than one rows, and will always be updated continuously. Here’s one example where we use group by.

Append mode is suitable for the scenario where output data is always appended. E.g. the following example which use tumble window.

There are 3 things you need to configure to make Pyflink work in Zeppelin.

There are 2 ways to use PyFlink in Zeppelin

%flink.pyflink is much simple and easy, you don't need to do anything except the above setting, but its function is also limited. We suggest you to use %flink.ipyflink which provides almost the same user experience like jupyter.

If you don't have anaconda installed, then you need to install the following 3 libraries.

If you have anaconda installed, then you only need to install following 2 libraries.

ZeppelinContext is also available in PyFlink, you can use it almost the same as in Flink Scala.

Check the Python doc for more features of IPython.

This is the recommended way of adding dependencies. Its implementation is the same as adding dependencies in pom.xml. Underneath it would download all the packages and its transitive dependencies from maven repository, then put them on the classpath. Here's one example of how to add kafka connector of Flink 1.10 via inline configuration.

The format is artifactGroup:artifactId:version, if you have multiple packages, then separate them with comma. flink.execution.packages requires internet accessible. So if you can not access internet, you need to use flink.execution.jars instead.

If your Zeppelin machine can not access internet or your dependencies are not deployed to maven repository, then you can use flink.execution.jars to specify the jar files you depend on (each jar file is separated with comma)

Here's one example of how to add kafka dependencies(including kafka connector and its transitive dependencies) via flink.execution.jars

There are 4 ways you can define UDF in Zeppelin.

It is very straightforward to define scala udf almost the same as what you do in IDE. After creating udf class, you need to register it via btenv. You can also register it via stenv which share the same Catalog with btenv.

It is also very straightforward to define Python udf almost the same as what you do in IDE. After creating udf class, you need to register it via bt_env. You can also register it via st_env which share the same Catalog with bt_env.

Some simple udf can be written in Zeppelin. But if the udf logic is very complicated, then it is better to write it in IDE, then register it in Zeppelin as following

But this kind of approach requires the udf jar must be on CLASSPATH, so you need to configure flink.execution.jars to include this udf jar on CLASSPATH, such as following:

The above 3 approaches all have some limitations:

So when you have many udfs or udf logic is very complicated and you don't want to register them by yourself every time, then you can use flink.udf.jars

Zeppelin would scan this jar, find out all the udf classes and then register them automatically for you. The udf name is the class name. For example, here's the output of show functions after specifing the above udf jars in flink.udf.jars

By default, Zeppelin would scan all the classes in this jar, so it would be pretty slow if your jar is very big specially when your udf jar has other dependencies. So in this case we would recommend you to specify flink.udf.jars.packages to specify the package to scan, this can reduce the number of classes to scan and make the udf detection much faster.

How to use Hive

In order to use Hive in Flink, you have to make the following settings.

In the section of Streaming Data Visualization, we demonstrate the different visualization type via paragraph local properties: type. In this section, we will list and explain all the supported local properties in Flink interpreter.

Zeppelin is shipped with several Flink tutorial notes which may be helpful for you. You can check for more features in the tutorial notes.

Join our community to discuss with others.